As I’ve mentioned before, Wifey and I are trying to follow either the Paleo or Keto eating plans.  We haven’t figured out which quite yet.  And quite honestly it’s going to be quite difficult no matter which way we go.

I think that keto will be a bit easier for us since it includes diary which paleo forbids.  Of course carbs are still the enemy. it’s the damn beer thing.

One of things that all the folks I’ve read, say the best thing to do it do a “cook up” when you have free time for the week. So we set out to do so again today.  We started off with Scotch Eggs from Mel Joulwan‘s “Well Fed” book. As the picture shows, they are quite

large. They will make excellent breakfasts I believe. We followed the recipe rather close, though as always we made some slight changes. Added extra herbs and larger eggs apparently.

Next up was “Green Chili Chicken” from Steph Gaudreau’s excellently named blog, “Stupid Easy Paleo“. This is a slow cooker recipe that came out beautifully. As usual, we made some slight changes.  We added some red chilies and pretty much doubled the garlic (’cause that’s how we roll). I was hoping that there would be enough left over for lunches during the week, but since the granddaughters each ate two “tacos” each (the eldest said it tasted like camp food, which is apparently a good thing!), and the Wifey and I each had seconds, there isn’t much 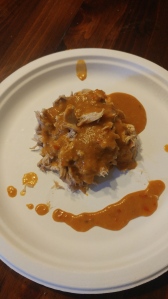 left.  maybe a lunch if we’re lucky. The sauce is not the traditional green color due to the addition of the red chilies, and don’t mind the cheap paper plate.  Wifey had already washed dishes three times and said that was enough.

I tried to make another batch of ghee, but totally botched it. So that was a waste.  No picture of that.

And then a third try at making zucchini chips. Mixed results. Some came out very tasty (we used dry ranch dressing as the flavoring), others so limp they just as well have been raw. That’s with the oven at 400 for about 30 minutes.

We still have to go more keto. Drop our carbs (but no way I’m cutting them down to 20g a day to start).

I had planned on making a Salmon, avocado and egg salad, but just don’t have the energy (we also did out usual Sunday gym workout, plus an extra couple of sets). Also thought of making some “Fat Bombs” from The Paleo Babe, but again.. no time or energy.

So leave me some links or recipes in the comments section. I need some help!

Hope you enjoy my food journey!