As I mentioned on my 4th of July post, Wednesday was granddaughter-the-elder’s birthday, and Thursday was Wifey’s®. Last Monday, granddaughter-the-elder informed us she was having a unicorn party at both houses (as in our house and her other grandparent’s where she lives). Of course, she didn’t bother to ask us if she could have a birthday party, she just decided she was going to have a party, and that was the end of the discussion.  Well, what’s a good papa to do, other than making sure she has a unicorn party? Between Wifey®, son-the-younger (AKA Daddy), and myself, we managed to get everything together.

Wifey® and granddaughter-the-elder, along with granddaughter-the-younger, starting browsing the Intertubes for unicorn party ideas. Somehow they decided on unicorn cake pops. Now we have never made any cake pops before, much less unicorn type, so Wifey®, being the smart cookie that she is, said we should make a trial batch before the party so we could get things right. Damn good thing we did. The first batch was an utter failure. The “instructions” (not really instructions – more like general ideas) were so generic, nothing went as shown. So she broke down and bought a cake pop tray. And while the cake pops came out correct, it was still anything but smooth sailing.

The concept is once you have the cake pops baked and stuck on a stick (and there are several sizes of sticks available – but no advice as to which size to use), you’re supposed to dip them in some melted candy. This will give them a nice smooth surface to decorate, plus it seals the cake portion making them last a bit longer.

But here’s the thing. We bought a package of “candy melts” that are specifically made for this type of project. We bought a 10-ounce package (only size available), the “instructions” say you only need 4 ounces to cover 24 cake pops. Bullshit. For one thing, despite following the melting instructions on the candy packaging, I never could get it to dippable consistency. I have been melting chocolate and other candies for many years and never had a problem like this. One “instructional” video shows that instead of dipping the pops, use a spoon and drizzle the melted candy over the pops. Nope, not gonna happen. The candy was never liquid enough to drizzle either. So we ended up only covering some of our pops.

So on to the unicorn decorations. Wifey® found “instructions” on how to make a unicorn horn with fondant. It sounded easy enough. Just roll out some fondant cut into about a 2-inch section fold, and twist to look like a horn. You can then mount it on a toothpick, or something similar, so you can stick in a piece of styrofoam like stuff and put them in the fridge to harden. Once they’re hard you paint them with a small mix of either water or something alcohol based (for quick evaporation) and some edible glitter. We used vanilla extract, but I think the dark color of the extract made the horns turn too dark. But for the ears, mini-marshmallows cut in half, and painted with the same mix, they came out beautiful.

Next, we were supposed to draw eyes on the pops. We

have special edible markers just for this purpose. But since the candy coating didn’t work correctly, and wasn’t smooth, it didn’t work either. But granddaughter-the-elder had a blast doing it anyway!

Wifey® then showed up my failures by piping the manes and little flowers on some of the pops. She has considerable piping skills! 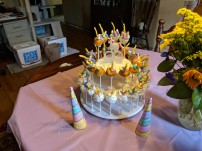 But, cake pop issues aside, the party was a lot of fun. Since we didn’t have a lot of time to plan it, we let granddaughter-the-elder set the guest list. So only a few really close friends of hers were invited.

Daddy (AKA son-the-younger), made us some homemade pizzas. He is a sous chef for an Italian restaurant here in town, and he has this pizza making stuff down pat. We had five pizzas and a mess of garlic knots (also homemade). And they were amazing!  I think we only had three slices of pizza left over! 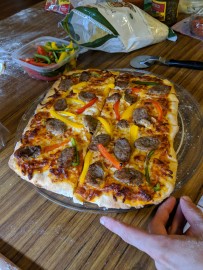 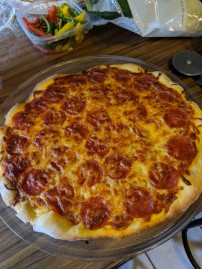 The best of all the kitchen work was how little I had to do. Not that I didn’t want to help, but my lower back issue flared up again Saturday afternoon so I was on muscle relaxers most of the weekend. So all I really did was sit and chop veggies, and fail at the candy coating for the pops. It also meant that I couldn’t join in on the tequila shots later that evening.

Granddaughter-the-younger said that the kids were celebrating sissy’s birthday and the adults were celebrating memaw’s (Wifey®) birthday. So there was a water balloon fight (all ages), fireworks later in the evening, beer (and I did have some of that) & tequila (adults only!) and movies with popcorn and a sleepover (kids only!). My driveway looks like a battle zone right now. Remnants of fireworks and brightly colored balloon pieces are everywhere.

One of granddaughter-the-elder’s presents was a stuffed turtle. She has a fascination with any stuffed toy, with a soft spot for turtles. The turtle looks decidedly drunk. One droopy eye and the pupils are different sizes! She absolutely loves it.

SO… how was you’re weekend?

P.S. If you have any good tips on cake pops, please leave a comment.  Thanks!