So our trip to Maggie Valley has come to an end, and it’s time to head home to Daytona Beach. We will miss our time in the mountains and the amazing sights we saw.

Here are a few of the pictures I didn’t post on the other days in no particular order.

Just to prove that I’m not the only terrible photographer in the family, Wifey managed to get this shot of me on Chimney Rock with my face in the shadow of a tree.

Some random waterfall we passed on the road. We just stopped, rolled down the window took a picture and drove off. Because that’s what tourists do!

I’ll bet Louis XVI wished he had a chandelier of Sierra Nevada bottles like this one. 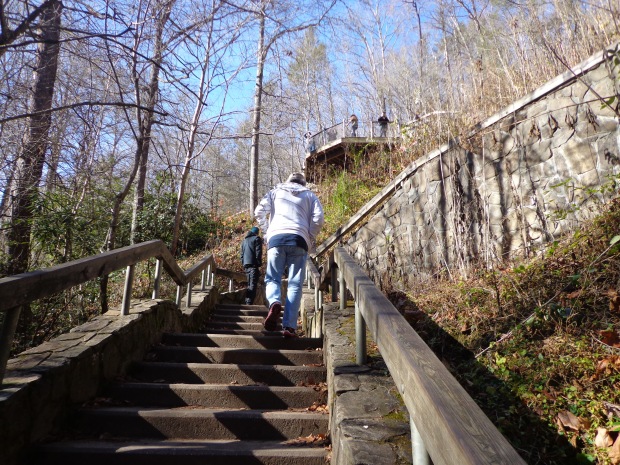 See? I told you Wifey kept taking pictures of my butt.

Wifey waited for over 15 minutes for this guy to get off of Pulpit Rock. She finally gave up and just took the picture anyway.  Thanks, random guy!

We, or at least I was, somewhat spoiled by the light traffic we experienced during this vacation.  Even on our trips over to Asheville traffic was not bad at all. Of course, it is the off-season for Maggie Valley, but Asheville is a large enough city to have traffic year round.  Such was not the case on the trip home. Our basic route was I26 east to I95 south. Sounds simple enough.

In my Army years, we did two tours at Fort Bragg just outside of Fayetteville, NC, for a total of 6 years or so. During this time we made many trips up and down I95, to Miami and back, at all times of the year and over just about every holiday you can think of. We have never had the traffic problems we had on this trip.  From the I26/I95 interchange to the Georgia line (about 86 miles) took us over three hours.  I have never been so frustrated in traffic in my life. Regular readers of this blog know how much I hate traffic (you can catch my thoughts on the “Elon Musk Are You Listening?” post).  The only thing that kept me sane was Wifey® finding the RV Trader website and reading me the various RVs she found.  We want to find us an RV in the next two years so we can travel more.

I’d like to give some love to a couple of places we stopped at while were in Maggie Valley and Waynesville.

First, The Buttered Biscuit.  We ate breakfast there three times. Nothing spectacular, just good food, served with a smile from very friendly folks.  Ask for Oliva if you happen to stop in. Not sure if they’re in Maggie Valley or Waynesville, as they’re at the intersection of US19 and US276. Basically on the border of each town.  (And like most restaurants in the valley, they’re closed on Tuesday. The oddest thing to me.)

One of our favorite little shops is Seven Silver Seas. Located right on US19 in Maggie Valley.  They have lots of handmade, free trade gift items from around the world at very fair prices. But be warned, it is a very “fragrant” shop. I don’t know if they have incense burning or just a heavy-duty perfume spray, but it gave Wifey® a migraine the first day we stopped in.  The second stop was a quick in and out to avoid the fragrance problem.

I have posted reviews on almost every place we stopped, ate or otherwise visited on Trip Advisor, look for “BeachDaze58” for my reviews.

And since this is the end of this series, and I haven’t played a single video yet, I thought this one would be fitting.

Enjoy! And please leave me a comment. Maybe a suggestion of another place to visit.

Wifey® and I have started spending Thanksgiving week away from the usual hustle and bustle of the holiday.  Both of boys are grown, and our granddaughters usually go with their other grandparents to see family in Tennessee. Plus my birthday falls right around Thanksgiving. Last year we took a cruise and were very disappointed. We’ve been on several cruises, but this one just wasn’t any fun.

So this year we took the advice of two of my co-workers and went to Maggie Valley, NC. The last time I was in Maggie Valley and surrounding areas was about 1979 or so. Not much had changed in the valley except the names of the shops.  Most of them still sold the same old “made in China” tourist trap stuff, with just a few exceptions.

We arrived on Sunday and left the following Saturday. We planned on making day trips and just being tourists as well as sitting in the cabin we rented for the week and doing some reading.  I’m not sure about Wifey®, but I only read about 2 chapters the entire week. I was going over all the brochures the very friendly and helpful welcome center folks gave us to come up with something to do the next day.

Here’s a map of the general area we were in so you can follow along. 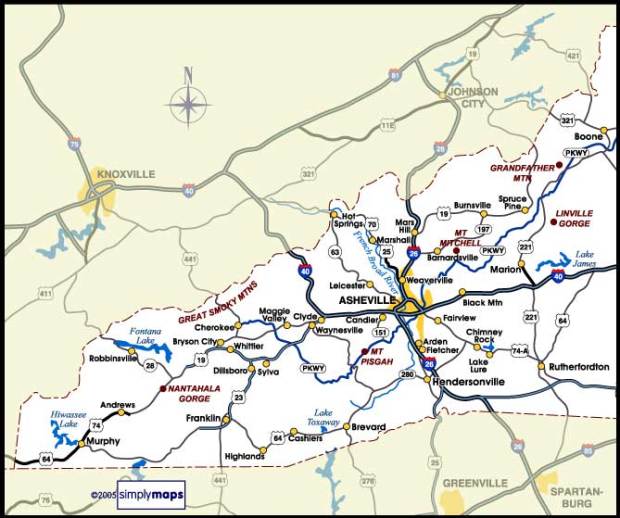 One of the things we (well mostly me) wanted to do was to visit the Sierra Nevada Brewery in Mills River, which is just outside of Asheville. So we jumped on their website a scheduled a tour for Monday.

So we head out on Monday morning to the welcome center to get the most scenic way there and an approximate travel time since we had a reservation for the tour. On the first curve out of our driveway down the mountain we have a flock of turkeys on the road! 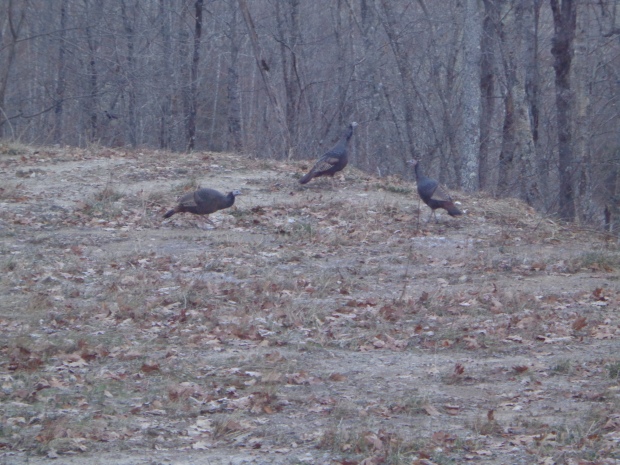 Wild Turkeys along the side of the road by our cabin

They sent us south on US 276 out of Waynesville. (You can see the thin black line that winds its way south out of Waynesville on the map).  Along this very steep, winding mountain road were several photo stops. The first we came to was “Sliding Rock”.  This state park usually has an entrance fee, but since we were there in the offseason, we just drove in and parked. Sliding Rock is exactly what it says. A big rock with water running over it that you can slide down. That is if you don’t mind the 36° F water temperature!

Looking up to the top of Sliding Rock

Also along this highway is Looking Glass Falls. Not a very big waterfall, but I thought the rockface was impressive. 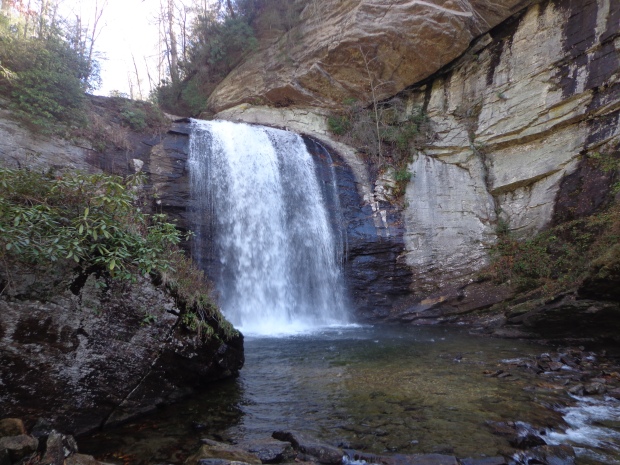 After these two stops, we continued south until we picked up SR 280 east, just outside of Brevard. This took straight into Mills River and: 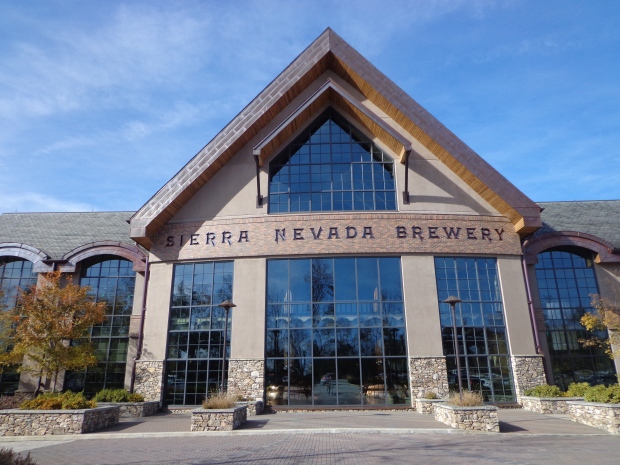 We made it to the brewery with 30 minutes to spare for our tour. Not bad for a flat lander that hasn’t driven in the mountains for over 40 years!

The brewery itself is very impressive. The company (the main brewery is in Chico, CA) is 0% waste. They capture everything from rainwater to the CO2 that fermenting produces and reuse it some way.  There are too many things to write about here, but I encourage you to check them out on their website.

We had a great 90-minute tour with our guide, John:

A 30-minute tour of the actual production facility and then a tasting of eight of their brews. 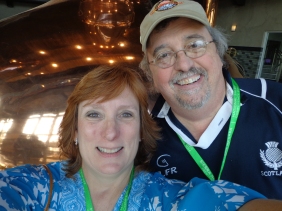 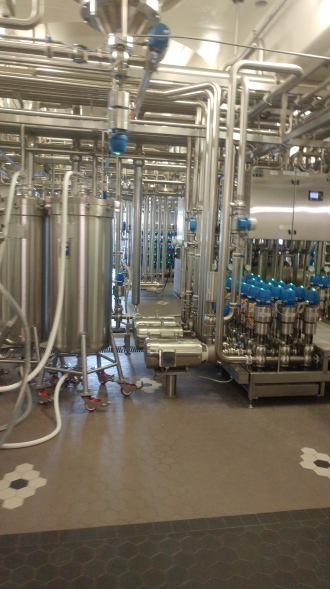 One the coolest rooms (and I mean that literally, it’s 37° F inside) is the hops room. That’s what you see in the last picture above.  Sierra Nevada is the only brewery in America that only uses whole cone hops. That means, the hops are not dried and then crushed into pellets.  These are freshly picked hops, that are compressed into planks and then frozen. We got to pick a hop flower and crush it between our hands and the aroma was amazing! 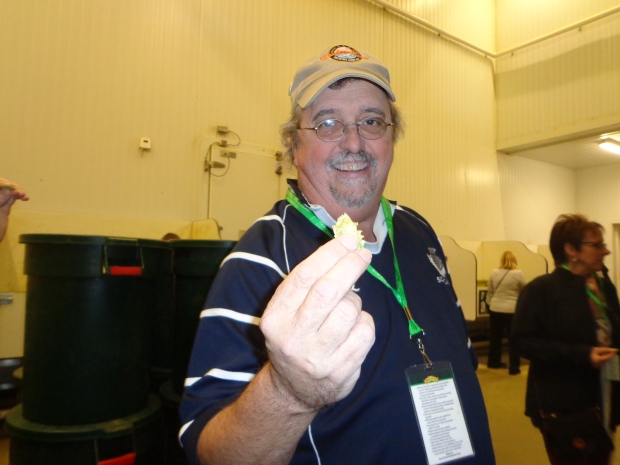 Me with a whole cone Crystal hop flower

After the tour, we had a bit to eat and drink in the taproom and headed back to the cabin.

The taproom menu and food were amazing!

We somehow managed to get back across to Waynesville in the dark, on the Blue Ridge Parkway, not really sure which way we were going.  So many switchbacks and elevation changes my head was spinning (and not just from the beer).

So that was day one. I’ll post the rest of the trip one day at a time, so you don’t feel like you’re reading a novel!